Metallica played at the Target Center last night!  This is normally where I add a comment about the opening band(s)… but there wasn’t an opening band… there was an opening comedian.  You read that correctly, Metallica didn’t have an open band act, they had Jim Breuer open for them.

Don’t get me wrong, Jim is a funny guy – which is a good thing as a comedian.  I mean, if a comedian isn’t funny, I guess they’re still considered a comedian, but they’re most likely VERY underemployed.  I first heard of Jim from the MTV Icon Metallica show in 2003 where he impersonates the members of the band (video quality is crappy).  In the video, you can see them laughing at him, loving his material.  Since then, he has become friends with the band, was the MC at Metallica’s 30th anniversary show in 2011 at the Fillmore Theater in San Francisco, has interviewed them several times, and now the opening act for this leg of the WorldWired tour.

I was hoping to see another musical act, but Jim was entertaining.  Enough about him, this post is about one of the best heavy metal bands of all time!

Metallica cleanly cranked out 18 songs than spanned their entire career.  I’ll post the set list at the end of the post for reference.  One really cool thing about the set list is that it changes for every show.  There are some anchor songs in the same points in the order, but 5 of the songs get swapped out.  The first time Metallica concert fans behind us thought this was the greatest thing ever and couldn’t stop yelling “F*CK YEAH!” when Jim took a camera backstage and talked to the band preshow which was shown on a few large screens hanging from the theater-in-the-round stage setup and the customization was announced.  Ahh, it reminds me of the exuberance I had when I was attending my first concerts back in the late-80s.

Lars’ drum riser rotated 360 degrees by the end of the show.  There would be about 4 breaks and during each, the riser turned 90 degrees, so at the end of the show, he would have faced everyone.  There were mic stands on each of the four sides of the stage so James, Kirk, and Robert could wander around during songs and play to everyone.  There were multiple hanging cubes from the ceiling that had LCD panels and four sides which had different coordinated graphics during each song.  They were very effective, moved up and down in patterns, and really added a lot to the show.  I saw some complaints online that the cubes interfered with upper level seats, and that the audio was not properly working on one half of the venue, but where our seats were, everything was great.

Each show is recorded and attendees can scan their ticket barcode to get a digital recording of their specific event.  No additional charge!  Nice way to combat bootlegs!  A couple of other nice things were done before the show… air cannon launched some shirts into the crowd, some upper-deck people were given floor seats, and some other upper-deck people got some VIP passes to say hello to the band backstage (this was given to a dad and his two young sons.  So awesome!).

Maybe I’m off-base on this, but yes, Prince was a Minneapolis native.  Yes, he was an amazingly influential musician.  Yes, he passed away tragically in early 2016.  Yes, he affected may lives.  But does every performer feel that it is a requirement that some sort of tribute be paid by performing “When Does Cry” when they come through on tour?  Between “Halo on Fire” and “Breadfan”, Kirk and Robert did just this… they payed their respects with a metal version of this song.  Many people enjoyed it, I guess I did too, but how long will this go on?  I know, I’m complaining about something minor;  I’m done now.

During “Moth Into Flame” a bunch of mini drones flew up from an opening in the stage floor and hovered around the band, mostly above and around Lars since he was in the middle.  They did some synchronized maneuvers and flew back into the stage at the end of the song.  I love that bands are getting into new technology and finding ways to encorporate it into shows.  Well done!

In the following photo, those lights are mostly drones.  There are maybe 1 or 2 cell phone lights (because people don’t get that a flash from that distance doesn’t do anything) but that is it. 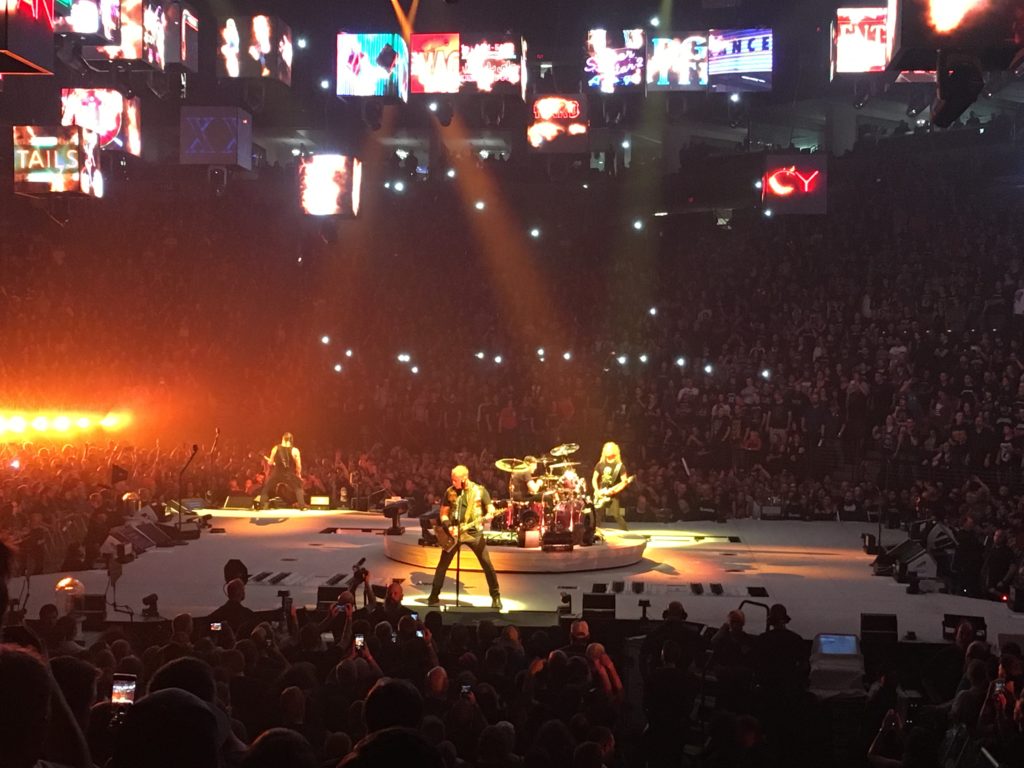 I’ve been a Metallica fan since before Metallica fans were mainstream due to the Black Album.  But for some reason, that I can’t explain, this was only my second Metallica concert.  The first one was in 2014 when they “opened” the US Bank Stadium before the Vikings football season.  I feel like I did myself a disservice by not going to their shows before, again, I really don’t know why I missed them.  I guess we all have some regrets in our lives (even if they are small regrets).  I’ve seen more concerts than I can count… good and terrible.  This show was great, top to bottom.  The only thing that would have made it better, for me anyway, was if there was an opening band or two. 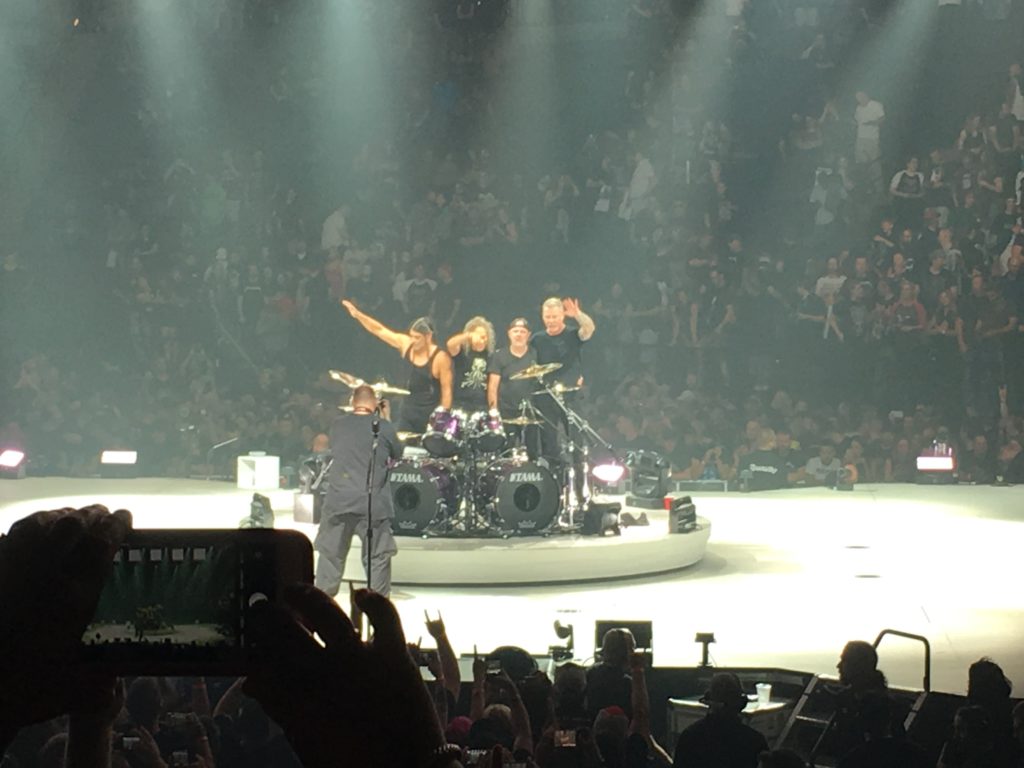 Set list:
Hardwired to Self Destruct
Atlas, Rise!
Seek & Destroy
Harvester of Sorrow*
No Leaf Clover*
Now That We’re Dead
Creeping Death*
For Whom the Bell Tolls
Halo on Fire
Breadfan*
Memory Remains*
Moth Into Flame
One
Master of Puppets
– Encore –
Spit Out the Bone
Nothing Else Matters
Enter Sandman
* = Customized items

FYI, if you want to check out set lists from other concerts, regardless of genre, check out a website I found a while back:  www.setlist.fm