The Foo Fighters ended the 2018 US leg of their Concrete and Gold tour last Thursday night at the Xcel Energy Center in Saint Paul, MN.  Doors opened at 6:00 PM, Gang of Youths started things off at 7:30 PM, and the Foo took the stage around 8:45 PM.  They love to put on a party and play long sets.  This was no different, they played 22 songs and finished around midnight!

I left work, drove home, then my girlfriend and I hopped in her car, grabbed some dinner, and then drive across town to the event.  Once we parked and made it through security, I joined the fray at one of the merch tables to get shirts for us and a friend who is out of the country; therefore, I missed Gang of Youths.  I’ve heard a few of their songs on the radio and online, and I’m sure that I would have enjoyed their performance, but it just didn’t work out.

What is with some people at merch tables?  Not the people working them, the people buying stuff.  There was this couple who bought maybe a dozen shirts.  They stood at the table having the guy go back and forth to grab different sizes, holding them up, trying them on, changing their minds, and chatting about the different styles… on and on.  I totally understand that you want to get a souvenir of the show, I have my own heaping pile of concert shirts, but there are a ton of other people who also want to get their souvenir before the main act starts.  Make sure you get what you want, but it should not take you more than a few minutes once you get to the table.  This isn’t a department store – get your shirt and go! 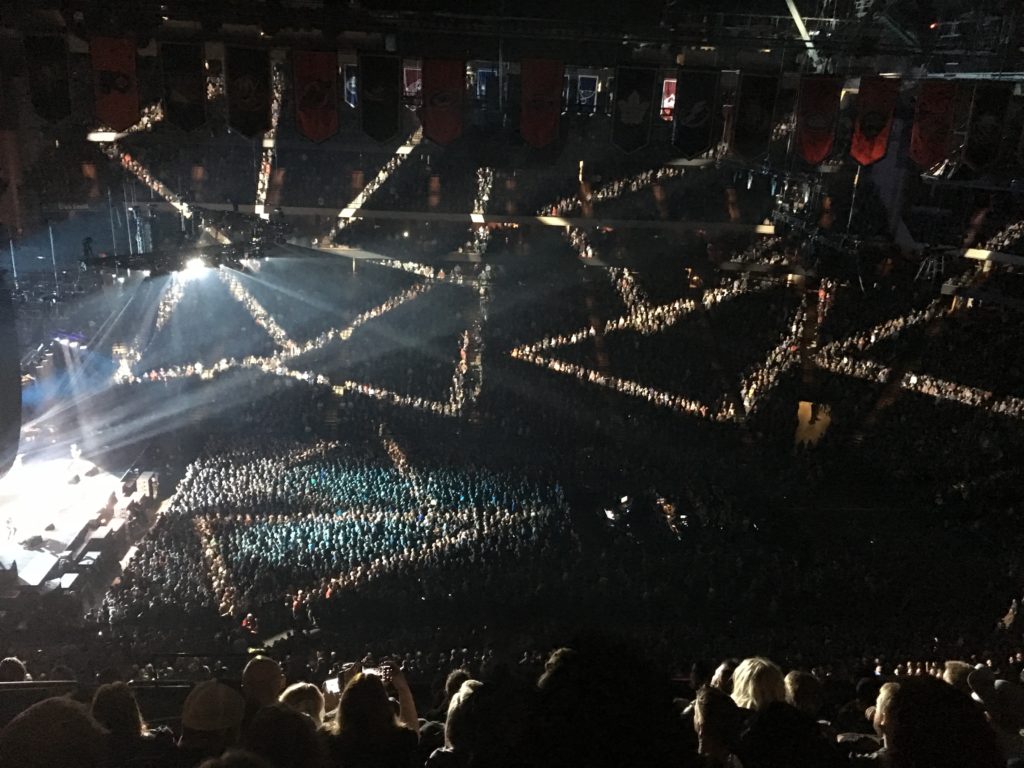 The band hit the stage with enthusiasm, playing their instruments in fast riffs and beats.  Dave Groel was amping the crowd up with a few typical questions of, “Are you ready to kick some ass?!” to which the crowd excitedly cheered.  An excitement built and built as they begin their first song, “Run” from the Concrete and Gold album.  It was a fun bit of pulling the rug out from under us – building up the tempo and then dropping a slow song on us right off the bat!  There’s usually a lot of fun and comedy built into a Foo Fighters concert, and this was no exception.

They worked their way back through time, playing recent songs earlier in the set and older songs later on.  The next three songs, “The Sky is a Neighborhood”, “La Dee Da”, and “Sunday Rain” were also off the Concrete and Gold album, and then “Something From Nothing” from Sonic Highways.

Dave said something along the lines of, “We’ve been at this for 25 years; we have a lot of songs to play.  We should do a show sometime where we play a song off of each album.”  This, of course, was met with much cheering from the crowd.

The Wasting Light album provided two songs, “Walk” and “These Days”.  Then “The Pretender”, “Times Like These”, and “All My Life” from Echoes, Silence, Patience & Grace  and One by One, respectively.  Two songs from There Is Nothing Left to Lose, “Learn to Fly” and “Breakout” brought us to the band introductions and individual solos.  It never ceases to amaze me how bright the venue can be when the band turns all the stage lights off and has the audience light up their cell phones – this was done during “Breakout”.  During the introductions, Dave referred to each member as something off of the McDonald’s menu.  Chris Shiflett = 12 piece McNugget with spicy mustard, Nate Mendel = something I can’t remember, Rami Jaffee = something I can’t remember, Pat Smear = Big Mac meal with large Coke (they then played “Blitzkrieg Bop” by The Ramones), Taylor Hawkins = Happy Meal with gender-neutral toy.  Dave hopped behind the drum kit, and then Taylor came out (referring to Dave as the McCafe of the band) to sing the Queen classic, “Under Pressure”.  If you know what food Nate and Rami were, please let me know so I can update this!

Three songs from The Colour and the Shape led us to the encore break: “My Hero”, “Monkey Wrench”, and “Everlong”.  As a tribute to the late Tom Petty, a wonderfully executed rendition of “Breakdown” was performed.  Some fans on the floor had a huge cardboard cut-out of a white limousine.  Dave asked if the band could have it for their recording space back home.  The fans gladly surrendered it and as a thanks, the Foo played “White Limo” from the Wasting Light album.  The evening finished up with “Cold Day in the Sun” and “Best of You” from In Your Honor.  According to previous set lists for this tour, they play “This is a Call” (self-titled Foo Fighters album) as one of their encore songs, but it was swapped out with “Cold Day in the Sun”.  If they wouldn’t have made the change, they would have fulfilled Dave’s foreshadowing earlier in the show about playing a song from each album.

Over the years, I have noticed that singers with a “gravelly” or “raspy” voice seem to tire/strain more quickly and just don’t have the longevity of singers with a cleaner sound.  Dave’s voice was strained from the beginning of the show.  I think it had to do with being on the road since June 2017 and it being the beginning of the cold and flu season.  I know my sinus allergies were going crazy for a couple of weeks before the show.  I just hope he says healthy and doesn’t cause damage to his vocal chords.

The full set list for this show, and many other can be found at the following link:
https://www.setlist.fm/setlist/foo-fighters/2018/xcel-energy-center-st-paul-mn-3b968020.html