On August 24, we had our Zero Session for a new D&D 5e campaign set in a homebrew land called Azuran.

What is a “Zero Session”, you may ask?  Well, it’s basically the player group getting together to talk about the campaign in preparation for the actual gaming sessions.  The DM will lay out the campaign concept, talk about the setting, explain what races/classes/alignments are within scope, etc.  It also gives the players a chance to chat with each other, meet everyone (if they don’t know each other already), discuss character options, and roll up characters.

Our group is comprised of RPG veterans, however the experience with D&D 5e is mixed.  Several have played D&D 2e for (literally) decades and nothing else, so the simplification of game mechanics in 5e caused many questions and some happy statements of surprise:

“As a Rogue, where do I find my skill percentages?  Oh, it’s just an opposed dice roll?  Cool!”

The Dungeon Master’s Guide (DMG) states that adventure challenge ratings are targeted for three to five players.  The Azuran campaign has a good number of players… eight in total, not counting the DM.  This should make for some interesting adventures since there will most likely be more enemies to battle!  Not everyone will be able to make every gaming session, and scaling the enemies based on who shows up is a relatively easy task.

We also watched some online videos talking about the different races and classes.  While these were more for those who were unfamiliar with D&D 5e, it was interesting to get perspectives from others on the same game content.  If you are interested in checking them out, links are at the bottom of this post.

Here is the list of races and classes in our group:

I am playing the Warforged Engineer, but I may change over to a Fighter or some other dedicated melee.  There’s a Druid in the group, and they can shape-shift into a bear or something, but relying on that for a second tank isn’t the best idea.  The Engineer class that I am playing isn’t from Wizards of the Coast.  It’s from The Arcane Athenaeum so it can change at just about any time.  I fact, as if this post, it is on revision 22 (version 4.5) since it’s initial release on January 24, 2017.  While it is great that the author is making improvements frequently based on community feedback, it can be a little awkward as a player coming into a session and telling the DM that their character has changed (again), or the player is set playing a certain version that has improvements because the DM doesn’t want the instability.  Either way, it comes down to communication between the player and DM.  I have a very good rapport with my DM, so it shouldn’t be much of a challenge for either of us. 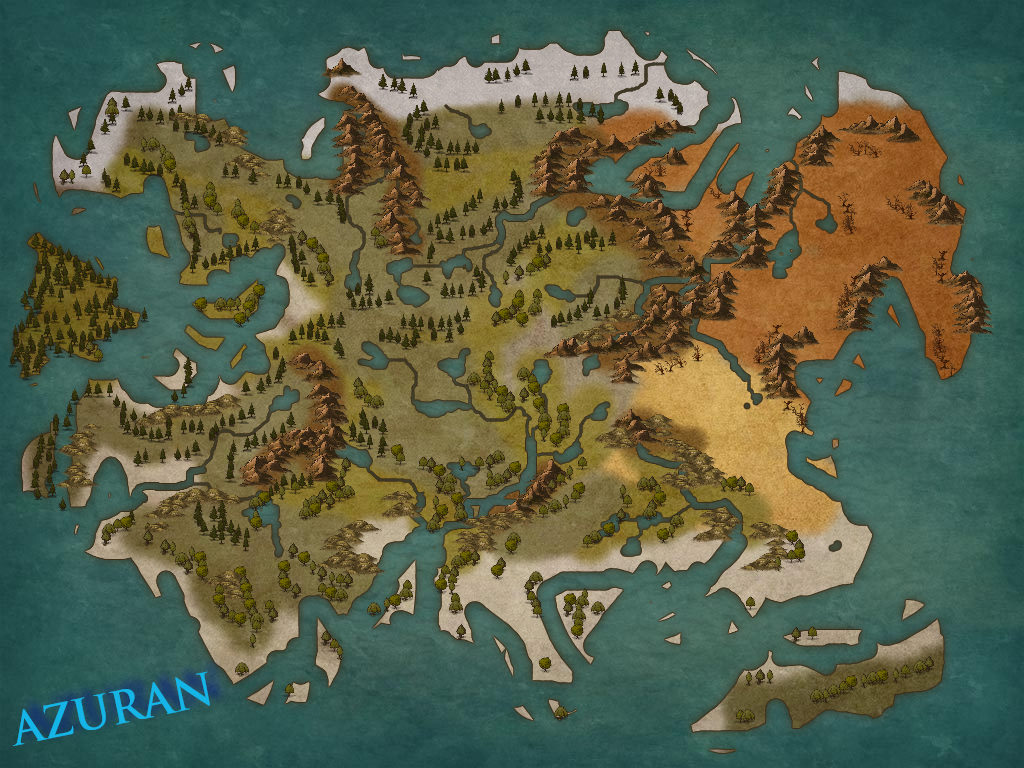 Azuran is a world developed by our DM, CosmicLad (for privacy reasons, I won’t be using personal names, I’ll use the character names).  Some of the information that follows is directly from information documents provided to the players by CosmicLad, so consider this my source citation.  We know a little bit about it, mainly information that was relevant to character creation – here is a taste, more will come out in future posts.  It is roughly the same size as the planet Neptune, which is about 4 times the size of Earth, and could fit 58 Earths in it if it were hollow.  There are dozens of city-states scattered across the world, known as ‘Territories’.  Most of them are typically around three thousand miles away from each other, so travel between them is neither quick, nor regular.  They tend to be comprised of just the race that established them, no “half races” are nor common, such as Half-Elfs, Half-Orcs, etc.  The main territory, Centralia, is mainly inhabited by Humans, but it has become a major crossroads and many come there to find adventure… such as our group!

Since I am trying to inject content into this blog, I volunteered to chronicle our adventures in Azuran, so stay tuned for more posts!