Two common questions that arise immediately when a new RPG campaign starts are:

Last Friday night, we had our first campaign session in the world of Azruan, and these questions came up.  This is the recap of how those questions were answered.

JL Brandt – a Human philanthropist, traveler, merchant, and driving force for uniting of the territories.  Also, the founder (leader?) of the Guardian Corps.
Centurion Patrol – Police force that exists across all of the United Territories of Azuran
Guardian Corps – A select group of the Centurion Patrol acting as special investigators, good will ambassadors, and negotiators.
The White Warriors – A terroristic group opposed to the unification of the territories and will do whatever they can to be disruptive. 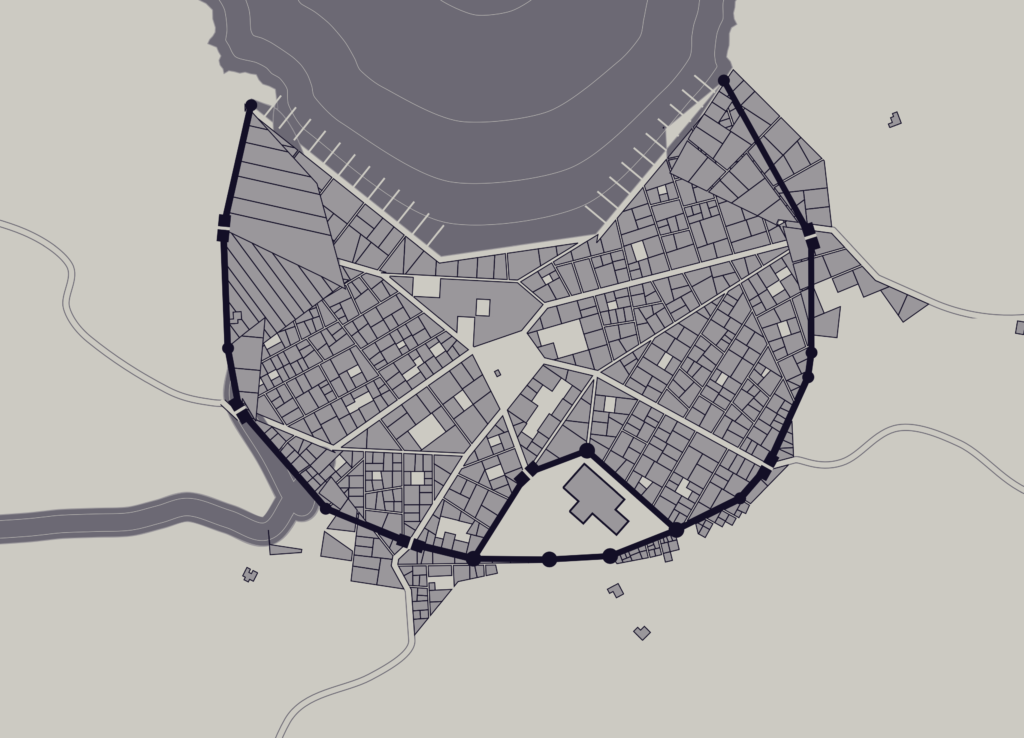 Our characters all arrived in the bustling city of Moon’s Crossing over the past few days and made their way to the huge bazaar at the center of town.  Thunder decided to try and earn some coin by playing his violin in the streets, which causes a relatively large crowd to gather.  Ashton was looking for pockets to lighten, Amrahen arrived a short while later and was making his way to the side to scan the crowd for people who may have been carrying magical items.  The other characters were milling about.  To the East, a caravan of stage coaches was making its way thought the crowded streets.  Suddenly, a crash was heard and the third coach in the caravan was turned on its side and set ablaze.  Caravan travelers and onlookers began to scream and call for help.  White Warrior ruffians advanced on the caravan clad in leather armor and wielding maces shouting against the unification and that they were after one (or more) of the caravan passengers.

Thunder ran up between the ruffians and the caravan people.  Fenjor cast Ice Knife and hit one of the ruffians.  Oso was with a Guardian Corps captain, they came to see what was going on.  The GC captain went to help the caravan people, while Oso ran up to attack the ruffians.  Amrahen fired his light crossbow at a ruffian and missed terribly.  Ensi moved into a tactical combat position.  Two ruffians swung their maces and missed Oso.  A Ruffian attacked Ensi and missed.  One ruffian hit Thunder with his mace, another missed.  Thunder cast Thunderwave at his two attackers, they failed their saving throws and got pushed away from him.  Ashton moved to a better position and with his short bow, he sunk an arrow into the same ruffian Ahrahen tried to hit.  Nikola moved up between Amrahen and the Ruffians in a defensive position.  Be’el moved to gain clear line of sight and missed with a cantrip.  A ruffian cast a FireBolt back at Be’el and critically failed his roll.  Wild magic happened, a boar appeared, and it began mauling the ruffian.  Magic is a strange and wondrous thing!

Fenjor launched his sling and hit.  Oso did a psi attack and caused his target some mental anguish.  Ashton struck true with his short bow and killed a ruffian.  Amrahen hit a ruffian with a shot from his light crossbow.  Ensi missed with his melee attack.  The GC leader shuffled some caravan people away from the fire and the fighting to safety.  Ruffians missed Oso and Ensi with their melee attacks.  Another ruffian moved up and sunk his mace into Thunder, who became very hurt.  The ruffian being mauled cast FireBolt and ended the boar attacking him while another ran to a covered cart opening the back gate releasing a Carrion Crawler!  Thunder killed a ruffian with a solid melee hit, then let loose a triumphant lion roar.  Ashton scored a critical hit with his short bow and a ruffian fell dead to the ground.  Nikola threw a rock which bounced it off the target’s head leaving a bloody mark.  Be’el moved laterally and hit the Carrion Crawler with a FireBolt for only a few points of damage.  A ruffian hit Ashton with a FireBolt in retaliation for killing his friend, but it was only two points of damage.  A ruffian missed Be’el with a FireBolt.

Fenjor moved across the battlefield and killed a ruffian with his sling, he then cast Healing Word on Thunder, restoring some precious health.  Oso dashed to a position in front of the Carrion Crawler.  Amrahen moved next to Nikola then hit a ruffian with a bolt from his light crossbow.  Ensi moved up to the bug and hit it with his great sword.  A ruffian hit Thunder with his mace, negating the healing Thunder just received.  Thunder cast sleep on the Carrion Crawler, but the bug was able to shrug off the effects.  Ashton missed a ruffian with his bow.  Nikola killed a ruffian with a thrown stone.  Be’el cast FireBolt on the ruffian attacking Thunder but missed.  A ruffian hit Ashton with a FireBolt, then began to flee.  The Carrion Crawler lashed out with tentacles, paralyzing Oso with poison.  It also tried to bite Ensi, but missed.

Fenjor ran after the fleeing ruffian and hit him with a sling shot.  Oso made his saving throw against the paralysis.  Amrahen also ran after the fleeing ruffian and his crossbow bolt missed.  Ensi, with great effort, swung on the bug with his greatsword, scored a critical hit, and inflicted double damage!  Amazingly, the bug was still standing!  A ruffian knocked Thunder unconscious with his mace.  Thunder made a successful death saving throw.  Ashton exacted deadly revenge upon the ruffian who dropped Thunder with a solid arrow to the chest.  Nikola threw a rock at the bug and missed.  Be’el moved within range of the Carrion Crawler and released a powerful Witch Bolt, electrifying it.  The fleeing ruffian feebly cast FireBolt at Fenjor, missing him.  The Carrion Crawler lashed out at Ensi, missing with its tentacles, but its teeth sank into the Goliath’s flesh.  Ensi, using Stone’s Endurance, was able to shrug off most of the bite damage.  Fenjor was hot on the trail of the fleeing ruffian and scored a hit with his sling.  Oso dispatched the Carrion Crawler with a powerful psi attack.  Amrahen launched a bolt from his crossbow and sank it deep into the back of the fleeing ruffian who fell dead in his tracks.  Finally, the Centurion Patrol showed up securing the scene and preventing the group from looting the dead or investigating the carriages as thoroughly as they had wanted.  Thunder was able to get healing from the CP, bringing him back to consciousness.

With the battle over, and the sun going down, the group decided to call it a night.  Ashton and Thunder went to an inn where Ashton tried to hustle some people in a card game but he was noticed!  A drunk patron saw that Ashton was pulling some sleight of hand tricks with the cards and started making a boisterous fuss.  Thunder persuaded the patron into thinking he drank too much and was imagining things.  The man agreed then fell over drunk.  Thunder, still recovering from the battle went to his room to get some much needed rest.  Ashton continued his hustle and made some money.  Amrahen, not needing sleep, went to the Tinker’s Guildhall to work on some projects.  The other party members didn’t have much money and they found work at a different inn where they performed chores in exchange for a night’s stay.

The next morning all members were approached by a different female Halfling (three in all) who stated someone was impressed by the deeds with the ruffians the evening before and wanted to discuss a job.  Details were thin except that the job may involve travel and doing good deeds; the Halflings were not at liberty to reveal who the employer was.  Intrigued, everyone agreed to at least meet with the employer to hear about the offer.  They were led to a large building that looked like a fortified inn, it was an outpost for the Guardian Corps.  Once inside, it was revealed that the Halflings (named Lue, Nue and Ore) work for JL Brandt.  All of them were on the caravan and the adventurers helped save them.  They were then led to a small auditorium to wait for JL Brandt, who wanted to speak with them personally about the job offer.  Oso’s character does not know his background and doesn’t know how to properly communicate.  Perhaps he was suffering from an injury or some form of malady.  While waiting, various characters spoke to him in languages they knew, hoping to get through to Oso.  Amrahen spoke in Sylvan and received a response when he said the word “Oso” or “bear”.  JL Brandt arrived and gave the sales pitch about joining the Guardian Corps.  The motley crew didn’t know each other, but when the time came to do the right thing, they all stepped up and took care of business.  This, combined with variety of races and classes, he felt it was a testament to what the Guardian Corps stood for and felt that they could truly help in uniting the territories.

We all agreed our characters would join!

Keep an eye out for further Adventures in Azuran!